A bit late, but finally here is my last blog post of the year – it’s been a long journey, with both ups and downs, but it was a fun one and undoubtedly a great experience. 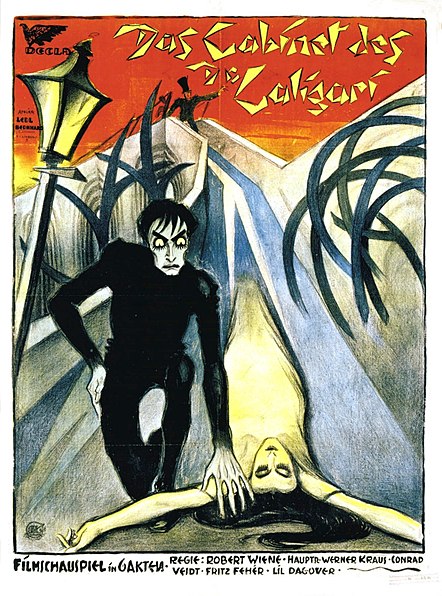 The expressionist films of the Weimar period are renowned for their visuals and dramatic tension, which was a result of attempting to compensate for the films’ lack of words and dialogue. Notably, The Cabinet of Dr. Caligari directed by Robert Wiene features a unique, twisted set design, and exemplifies the dark, brooding atmosphere that is often found in films of this era. 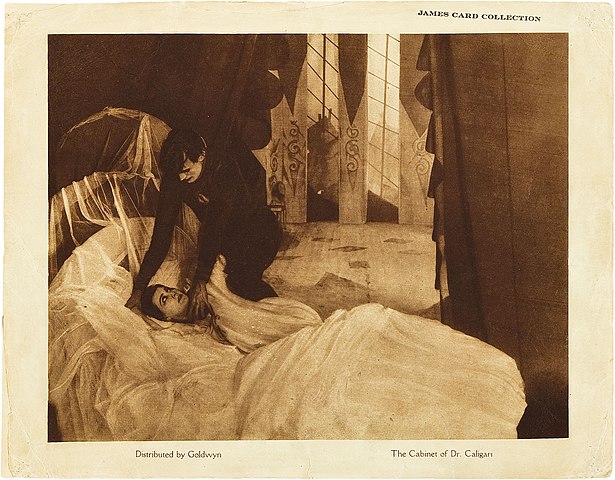 The Cabinet of Doctor Caligari Lobby card (1920). In the public domain. Accessed from Wikimedia Commons.

The town in which the film is set in is all sort of distorted – the buildings are jagged, curved, and defy the laws of physics, the people drift aimlessly down the carnival, in a strange perspective, and the darkness clashes with light at every turn. A scene in which all of the set elements come into their greatest degree of influence is the film’s climax: Cesare, controlled by Dr. Caligari, sneaks through the night to kidnap Francis’ fiancee. The woman is lying vulnerable in a bed of pure white; the insomniac creeps through the windows, surrounded by a shroud of darkness, and flanked by the jagged pillars next to his entrance. As he approaches, his dark figure merges with the background, and it is as though the shadows themselves are encroaching upon the unprotected damsel. Here, the set design is not only laden with symbolic meaning, but is also a huge part of what makes the scene so dramatic.