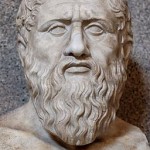 Christina Hendricks gives the historical political context in which Plato wrote this text, talks about the Socratic elenchus and how it is exemplified in Book I, and discusses the parallel structure of the kallipolis and the soul.